Here’s a link to an article I recently wrote for Yourtango.com on emotional intelligence.  I wanted to share it with you here.

Interestingly, these are skill sets that we in the psychological arena have explored in the footsteps of thinkers like Carl Rogers and Irving Yalom. And so it is that the foundations of business and psychology find a nexus. However, not surprisingly the nexus, if we consider the heart of any business being the configuration of people involved. Groups, teams, sections, divisions, departments, executives – call each part what you will – are not only dependent on their group emotional intelligence (and the emotional intelligence of each individual in their respective groups), but play a significant roll in the organization being something greater than simply the sum of its parts.

Is your interest piqued yet? You don’t have to take my word for it. Forbes magazine online quoted Terry Bradberry of Talentsmart as saying their studies discovered, “alongside 33 other important workplace skills, emotional intelligence is the strongest predictor of performance, explaining 58% of success in all types of jobs.” Let’s put emotional intelligence to work for you and your organization!

Until next time,
Dr. Todd 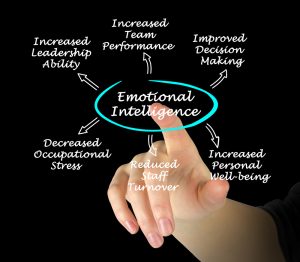